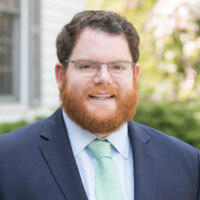 Charlie Rocco is the Treasurer at the Fairfield Emerging Leaders Organization. Charlie Rocco can be contacted via phone at (203) 260-1776 or via email at charlie@monecoadvisors.com. Charlie started at MONECO in March of 2018 when his firm, Rocco & Associates Wealth Management, joined with MONECO. He began working at Rocco & Associates in March of 2012. He initially joined the firm to help his father market and grow the business. Planning on going back to law school, Charlie thought his time at Rocco & Associates was going to be short, but after only 3 months, Charlie realized that financial planning was what he wanted to do with his life. He decided the best way to learn more about his chosen profession, without giving up his aspirations for higher education, was to do both. By day Charlie continued to work at the firm, being elevated to President in January 2015. By night Charlie attended Fordham University where he earned a joint degree in law and business. He graduated cum laude from the School of Law, and was on the Dean’s List at the Gabelli School of Business, signifying a perfect 4.0 grade point average during his tenure. His legal background has allowed the firm to take a deeper dive into the financial planning process, especially with tax and estate planning. After graduating, Charlie continued his education, earning both his Certified Investment Management Analyst® designation in 2017 and his CERTIFIED FINANCIAL PLANNERTM designation in 2019. Charlie was awarded a Milli Award* in 2016, given to top millenial business professionals in Fairfield and Westchester Counties, and in 2019 he was named one of the 40 under 40 business professionals to watch in Fairfield County by the Fairfield County Business Journal. Charlie started his career with The Aspire Group, a sports management consulting firm based in Atlanta, GA. Before working with Aspire he was also in Atlanta attending Emory University, where he graduated with a dual degree in Economics and Psychology. Charlie lives in Fairfield with his wife, Eilis. He is active in the Fairfield community serving on the board of the Regina A. Quick Center for the Arts at Fairfield University, the Financial Planning Association of Fairfield County, and the Fairfield Emerging Leaders Organization, a professional group within the Fairfield Chamber of Commerce.

Please note this email signature is dynamicly generated based on information in our database about Charlie Rocco. Below is a screenshot of how our code constructs the signature with dynamic elements.

Note:
- Content pulled from the database in order to structure the signature
- The highlighted elements linking to relivant destinations such as organization, contact info, etc
- The dominamt color pulled from Charlie Rocco's primary organization to use to highlight links in the signature

A simple yet functional "Person" schema markup code for Charlie Rocco would look something like this:

Embeding this code (or a more complex variation of this code) in a webpage that feaures Charlie Rocco, will make that webpage elligable display dymanic "Rich Results" in search engines. This is an SEO tactic that improve click-thru-rate on search results.

Just be sure to replace the "url" value with the url of the webpage. This schema is set up to point to https://labate.io/people/charlie-rocco.

There are many other types of schema other than "Person", such as "WebSite", "WebPage", "Blog", "Event" etc. They all communicate to search engines the content of page, greatly increasing the chances for dynamic search result placement.

Thank you! Your submission has been received!
Oops! Something went wrong while submitting the form.